One of the most fun learning experiences I’ve had while working on our Summer of Code application is getting to work with octopress. I had previously used it a little bit for my personal blog, but I’d mostly just made a couple of posts and with some help, I was able to set up a new layout.

Working on our team was a whole new challenge. We agreed that it would be a better learning experience for us as a team that if we ran into any trouble, we’d help each other out.

As fun as it has been to learn octopress, I have run into loads of problems! It’s not just octopress either, it’s git! Practice makes perfect though, right?

The first silly problem I ran into was that I forgot my SSH key password. It shouldn’t be that big a deal, right? Just make a new one? It wasn’t working though… I tried a couple of times to get it to work but it just wouldn’t. Finally I had to give in and just watch despairingly as my awesome Github streak reset (keeping it up for 6 days was a huge personal achievement), this wasn’t going to be a problem that I would solve in one day.

Naturally, the next morning I just tried the basic steps I’d been following the day before and… it worked. Why? We shall never know, it’s just one of those things. 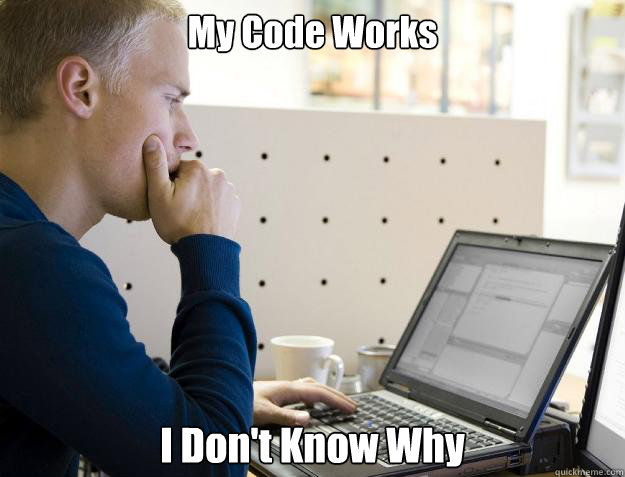 The great news was that it worked and I could continue working, right? Wrong. I had naïvely thought that I could keep working on the posts I had to do, even without git, because sitting around and waiting for it to fix itself was a huge waste of time.

That was a huge mistake and it is one I won’t be making ever again.

The reason was that was such a terrible mistake was that, of course, in the mean time, Shelly had contributed posts of her own. This meant that I had unwittingly caused a monstrous merge problem, which, to make matters worse, I had no idea how to deal with.

After many struggles, the solution we applied was to make a new folder, clone the repository onto there, move all the edited markdown folders somewhere else (thank goodness I had only edited markdown files!), move all the edited folders into the newly cloned repository folder, add, commit and finally push. It was a pretty crazy solution, and there’s probably a better way to do it, but it did the job!

Shelly and I kept running into obstacles on our git journey, and I feel like it’s never been more applicable but practice does make perfect. I feel like the more we use it, the less both of us have been breaking things.

Just to make sure we don’t run into any snags, I made us a little cheat sheet: 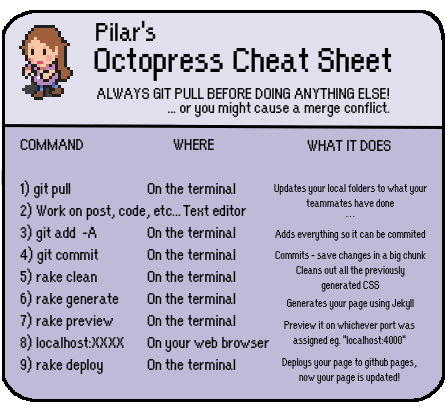 This whole experience brought back memories of solving puzzles as a kid, or getting through a tough dungeon in a Zelda game. I think we just need to keep practising, but it’s been a fun experience running into these troubles and having to find solutions.